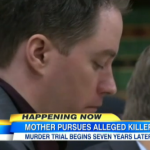 Dan appeared on Good Morning America to discuss the case of David Pietz, a man on trial in his wife’s killing more than seven years after her death. Why now? Dan answers, “Obviously, they didn’t think they had enough evidence up ’til recently, and I think that two things have happened with regard to new technology: A) with regard to cell phones, and B) with regard to DNA. So, they’ve now been able to better pinpoint where a crucial phone call was made that authorities say was incriminating… and with regard to DNA evidence, they say they were able to link him to her car in a way that they might not have been able to previously… so some new technology has helped them to confirm their suspicions, because they’ve been suspicious of him since very early on in the investigation.” For more, watch the segment here.