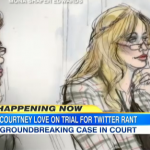 Dan appeared on Good Morning  America on Thursday, January 16th, to discuss Courtney Love, who is charged with defamation in the very first libel trial involving Twitter. This trial has the potential to change legal precedence as we know it and the art of the the celebrity twitter feud. What does this case hinge on? Says Dan, “It hinges primarily on  the question of, is this an opinion or is this fact? This is standard libel law, in any libel case there’s a big question which is, in this case, when she said that her lawyer was bought off, is that her just saying, “I think my lawyer was probably bought off” or is she literally stating a fact, that is “I think my lawyer was paid to do something,” . If it’s a fact,  than she’s in trouble, if it’s opinion then she’s protected.” Watch the full clip here.