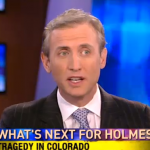 Dan appeared on ABC’s This Week yesterday to discuss the Colorado shooting that occured early morning last Friday in an Aurora, Colorado theater midnight screening of The Dark Knight Rises. A gunman, later identified as 24-year old James Holmes, opened fire on the theater, killing 12 and injuring dozens more. Authorities then found his apartment booby-trapped. He is set to appear in court, and host George Stephanopoulos asks, will he face the death penalty? “Absolutely. Remember, we’re talking about 12 people dead, many more attempted murder charges as well. He’ll have no chance at bail. Not just because of the crimes themselves but also because he remains a danger to society, based on the booby trapping,” responds Dan. So what happens first? Will he plead the insanity defense? First, Dan reminds viewers, he has to be declared legally fit to stand trial. “Everyone is talking about, is he going to plead insanity? That’s a question that comes a little bit later down the road. The first question is going to be, is he competent to stand trial? And that’s a really low standard. I mean, he has to literally not be able to understand the proceedings to be incompetent to stand trial. He has to be able to communicate with his lawyer,” says Dan. What happens remains to be seen. Watch the full episode here.