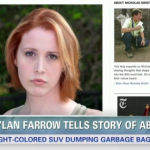 Dan joined Brian Stelter on CNN February 2nd to discuss Dylan Farrow’s recent open letter about Woody Allen’s alleged sexual abuse. Although these allegations were investigated in the 1990s, this is the first time the public is hearing Farrow’s own words. “What’s new is hearing it in her own words, meaning we’ve heard her having been interviewed, we heard certainly, back in the day a video tape of her as a child but now as an adult woman, describing in detail what she says happened, is new and in my view, no question, newsworthy.” Watch the full clip  here.