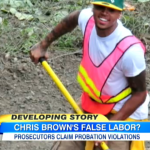 Dan headed to Good Morning America today again, but to discuss a different story: Chris Brown. Did the star skip his community service? Dan says of the singer’s battle in court against allegations he violated his probation: “There’s no question that they’re spending more time on this case than they ordinarily might; on the other hand, prosecutors are all the time accused of letting celebrities off easy.” He goes on to discuss allegations against Brown’s lawyer, but ultimately, Dan concludes, “Look, the fundamental question in my mind is not going to come down to these other incidents, it’s not going to come down to the cell phone, it’s not going to come down to anger management questions, it’s going to come to down to the question of: did he serve the community service or didn’t he? If he literally wasn’t there and wasn’t able to serve the community service as he supposedly claimed he did and was signed off on, then that’s a big problem for him.”  Watch the full segment here.