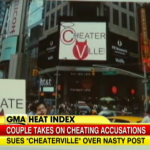 Dan appeared on Good Morning America today to discuss a lawsuit that a California couple is filing against Cheaterville.com, which is exactly what it sounds like – a website that supposedly exposes unfaithful spouses. He explains, “The website is called ‘Cheaterville,’ and as as you can imagine, it is not the kind of place you want to be mayor, or even mentioned, but now a Sacramento couple aren’t just complaining; they’re going a step further and suing the people responsible for the anonymous posts along with pictures, and they say it was all based on a lie.” The couple has been married since 2009; they say faithfully and happily — but a Google search of their own names turned up surprising posts about them from the site. Cheaterville alleges that the husband, Jared, is gay and cheating with a man, and reportedly uses the wife’s photos from Facebook on the site. The site’s founder claims that “It was not started for revenge or malicious intent; it was designed to warn people, and I’m never going to change that.” But the couple is filing a defamation lawsuit, claiming that they suffered “severe emotional distress, loss of reputation, and economic damages.” To find out more about the case,  watch the segment here.