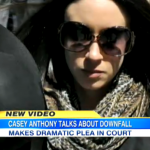 Dan appeared on Good Morning America today to discuss one accused female killer, but no, it wasn’t Jodi Arias. Casey Anthony, formerly charged but found not guilty of murdering her daughter Caylee, has found her name back in the news: this time filing for bankruptcy. She recently made a dramatic plea in court to be cleared of her debts, the first time she’s appeared in public since the trial. Dan comments, “I expect that a court will allow her to file for bankruptcy. I think she’ll be able to get rid of all of her legal debts, any money she owes to people for services… the money she may not be able to erase, for example criminal penalties or fines – can’t get rid of those… The real question’s going to be: what about the money she owes to the sheriff’s department and the investigators that she was ordered to pay? You’re talking about significant — well over a hundred thousand dollars… is that viewed as a criminal penalty or fine? My guess is probably not.” For more, watch the full video here.