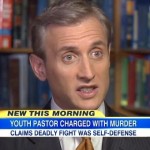 Dan was interviewed for a Good Morning America segment on Robert Cox, the youth pastor from California who is charged with murder after a fight that resulted in the death of businessman, Link Ellingson, six months after the encounter. Cox was leading a ministry trip last year when they stopped for late-night dinner at a sports bar in Las Vegas. Cox says he was acting in self defense when Ellingson aggressively approached him and the group, starting a fight. Cox says he pushed Ellingson to the ground but claims he never actually hit him, however, court documents suggest otherwise. Ellingson slipped into a coma and died six months later due to a head injury and Cox is now charged with his murder. Says Dan, “This is a self defense case, and so the crucial questions are going to be was the victim actually the aggressor? And did the defendant need to do what he did to protect himself?” Watch the full here.