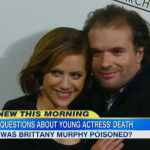 Dan appeared on Good Morning America this morning to discuss the claim that Brittany Murphy’s father made: he believes the actress and her husband were murdered.  Both Murphy and her husband died of, what was declared, natural causes within a short time of each other. But now, the actresses father, believes they may have been poisoned. Explains Dan, ” It seems incredibility suspicious,  I mean when  you think about the notion that two relatively young people dying within months of each other, of similar types of natural causes, it’s a little hard to believe. Yet the coroners office will tell you, ‘ look we looked into this, we came up with a conclusion, that it was natural causes, it was a series of natural causes and we’re standing by our finding at that time.’ The fact that they didn’t investigate for poison specifically, is something that the family is really focusing on here and the question is going to be what are the authorities going to do with that now.” Watch the entire clip here.