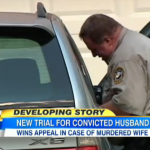 Dan was also back on Good Morning America today, joined by HLN’s Nancy Grace, to discuss the retrial of Brad Cooper, who was convicted in 2011 of stranging his estranged wife, Nancy Cooper, to death in July 2008. A three-judge panel of the state Court of Appeals heard arguments back in April on whether defense attorneys were thwarted from presenting their best case before Bradley Cooper was convicted of first-degree murder in 2011. Brad claims Nancy went out for a jog and never returned. Her body was later found in a drainage ditch less than three miles from the couple’s home – and a map of that spot on Brad’s computer become a key (but contested) piece of evidence during his trial. Was granting a retrial the right decision? Dan answers, “I think it was. I mean, this was the most importance piece of evidence. Imagine a Google search for the exact spot where her body was found the day before it happened, and the defense wanted to present evidence that there were invalid time stamps, there were no cookies found… and as a result, their experts believe that it either could have been planted or tampered with. That’s crucial evidence that the defense should have been able to present and I think that the Appeals Court made the right call.” For once, Nancy agrees that it was the right decision — but she does not think it will make a difference. See the segment here.