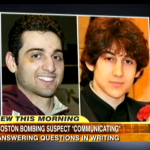 Today, Dan appeared on Good Morning America a number of times to discuss the suspect in last week’s Boston bombings, currently being held in custody. In this clip, alongside Brad Garrett, Dan discusses why Miranda rights aren’t really an issue in this case, even though they haven’t been read to the suspect yet. Says Dan, “They’re calling it the public safety exception – unclear exactly how long they’re allowed to do it… The further away from the incident it is, the more perilous it is constitutionally, but to some degree it doesn’t matter. Let’s assume for a moment that he challenges it later on and a court says, ‘You shouldn’t have done that; you shouldn’t have questioned him without his Miranda.’ – What happens then? It means that they throw out his statement. So what? They don’t need his statement… This is about getting intelligence from him; it’s not about getting a statement from him that they can use in court.” In terms of predicting what will happen, Dan continues, “It will be a death eligible charge for sure, a decision probably made later as to whether to actually seek the death penalty.” For more, watch the segment here.