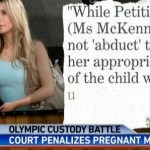 Dan appeared on World News last night to discuss the controversial case of Bode Miller, an Olympic gold medalist who is currently fighting a custody battle with the mother of his child, former lover, Sara A. McKenna.  McKenna became pregnant in 2012 after she had a brief relationship with Miller. While pregnant, McKenna moved from California to New York City to study at Columbia University. Prior to the birth of their son, McKenna claims Miller wanted nothing to do with the child. However, after the baby was born, McKenna claims, that Miller changed his mind and accused her of fleeing with their unborn child. A New York court agreed and a California court granted Miller custody of their child. This raises a striking a big debate about family ties. Reports Dan, “If a court ends up telling a pregnant woman where she can and can’t travel, based on where the baby may be born, that definitely sets a precedent, I think a dangerous one. ” Watch the entire clip here.