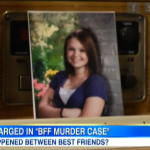 Dan appeared on Good Morning America today to discuss the shocking “BFF murder case” out of West Virginia. Two teen girls have been accused of stabbing their third best friend, 16-year-old Skylar Neese, to death last summer. She went missing in July 2012 – surveillance footage showed her sneaking out of her parents’ house, but a search turned up nothing for months, until her best friend Rachel Shoaf, came forward with the location of Neese’s dead body and admitted to “maliciously and intentionally” killing her. Meanwhile, Neese’s other best friend, Sheila Eddie, comforted Neese’s family — until she was charged with the murder of Neese, too. Of the horrifying friendship go wrong, Dan says, “It’s an awful story, starting with the fact that you’ve got two friends accused with stabbing her… but what’s interesting is you have one of them pleading guilty to second-degree murder, not first-degree murder, which is where their age comes into play… in the state of West Virginia, when you’re talking about murder, anyone over the age of 14 automatically is supposed to get transferred to adult court. The leniency can come when it comes to what sort of sentence.” For more, watch the segment here.