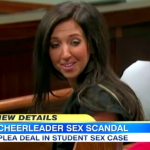 Dan appeared on Good Morning America today to discuss the latest sports sex scandal: Sarah Jones, former Bengals cheerleader and teacher, has been charged with having a sexual relationship with an underage student and is pleading guilty. Jones, 27, who taught at  Dixie Heights High School, pleaded guilty to reduced charges of sexual misconduct (a misdemeanor) and custodial interference (a felony) – she originally plead not guilty in April, claiming the teen was just a family friend and the rumor was started by other girls at the high school. Once the allegedly incriminating e-mails were allowed into court as evidence, things changed: “It’s a game-changer,” said Dan, continuing, “The minute the judge says… these are coming in, Sarah Jones and her attorney probably sat down and said, ‘Okat, is this worth it?'” Dan says the evidence is at best embarrassing and at worst incriminating. Watch the segment for more, including the complications arising from the alleged victim’s family’s support of Jones, here.