04 May Dan on Baltimore Prosecutor 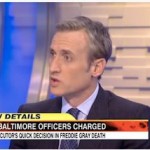 Mediaite founder and ABC News Chief Legal Analyst Dan Abrams was on Good Morning America Saturday to weigh in on the charges brought against six Baltimore police officers by Maryland State Attorney Marilyn Mosby in the death of Freddie Gray. Asked if he thinks the charges will “stick,” Abrams said he had his doubts.

“I think some of the lesser convictions will likely stick in certain cases, but I think most of the more serious charges, it’s going to be really tough to get convictions on a lot of these charges,” he said. “I think it is fair to say that this prosecutor, as a legal matter, has overreached.”

Abrams explained that two of the officers charged with manslaughter only came on the scene later and perhaps did not do enough to save Gray’s life. “That may be wrong,” he said, “but getting a jury to convict them of manslaughter for simply not helping enough is going to be very, very tough. And I think that once this case moves along, you’re going to see either the charges reduced or in the end a jury simply not convicting on the more serious charges.”

On the “conflicts of interest” issue raised over Mosby’s ties to one of the Gray family’s attorneys, Abrams said he doesn’t think there is a “serious claim” there for her to recuse herself. “But the rush to judgment is going to be at the heart of the defense,” he added, “that not enough time was taken to allow the prosecutor to fairly and objectively evaluate the evidence.”

“I think there are going to be some very powerful defenses here,” Abrams predicted.