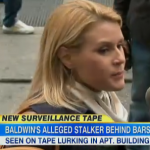 Dan appeared on Good Morning America this morning to discuss the implications for the woman who has been allegedly stalking Alec Baldwin and his family. Yesterday, the woman claiming she had a love affair with the 30 Rock actor, was held in contempt of court and sentenced to 30 days in jail after the judged warned her on multiple occasions. What does this mean for accused stalker, Genevieve Sabourin? Explains Dan, ” Technically it’s supposed to be separate, its an entirely separate charge but of course as a practical matter it’s got to be connected [the contempt of court charge]. This is the same judge who is going to be deciding her fate. She is accused of stalking and harassing and she’s effectively harassing the court at this point, so to think that this is going to be completely separate I think would be foolish, you can count on the fact that her lawyers got to be furious at her that she kept yapping away in court.” Watch the full clip here.