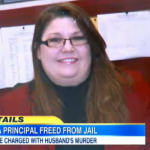 Dan appeared on Good Morning America today to discuss the case that’s shocking a community: a well-liked elementary school principal, in a seemingly happy relationship, accused of murdering her husband. Leslie Jenea Chance, 46, was arrested in connection with the murder of Todd Chance, 45, late last week. Chance’s body was discovered by an almond field worker lying on a dirt extension, and officials later determined he died of multiple gunshot wounds. Yesterday, though, she was released as prosecutors want better evidence before filing charges. Dan says, “People sometimes forget that the first step is that the police make an arrest on suspicion of, but then the DA has to file the charges which say, in effect, we believe we can prove this case beyond a reasonable doubt. In this case, the prosecutor is saying, ‘We don’t think we can do that – yet – based on the evidence you presented…. With the authorities coming out and saying she’s still the sole suspect, you know they are going to remain focused on her. It seems that there’s one ‘something’ that the prosecutors don’t feel that they have here yet.” For more, watch the segment here.