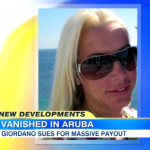 Dan appeared on Good Morning America today to discuss the latest developments in the case of Robyn Gardner, who mysteriously disappeared during an Aruba vacation in August. The main suspect, Gary Giordano, is now suing to collect on an insurance policy he took out on Robyn. Last week, he filed a lawsuit against American Express for $3.5 million for failing to pay him the death benefit he says he deserves. Gardner’s body has not been found and is presumed dead. “His position is he had nothing to do with her disappearance, and his position is that’s why you buy insurance,” says Dan. “The problem is he’s got to know that everyone is watching, that he’s the only suspect, and for him to go forward with this now, less than a year since she’s gone missing, is just foolish,” Dan continues. Legal issues aside, Dan believes that people will look at this and take a step back. “There still needs to be a formal declaration made that she’s even died,” explains Dan. So will he get the money? “Not automatically,” answers Dan, continuing that the insurance company could fight it, arguing the claim is not legitimate even if Giordano is not criminally charged. If he does get the money, someone related to Robyn Gardner could then file a civil suit against Giordano for the money. Watch the full video here.