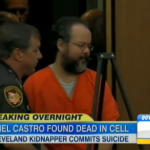 Dan also appeared on Good Morning America today to discuss the death of Ariel Castro, who was found hanging in his prison cell last night.  The Ohio man had been sent away for life plus a thousand years for holding three women captive, and was was being held in protective custody, with guards checking on him every 30 minutes. Castro had been described by prison officials as calm and cooperative upon his arrival.  Dan comments on the death: “This shouldn’t happen… protective custody is supposed to protect him from other inmates, suicide watch is to protect him from himself. And it seems that he was not on suicide watch, and there are going to be a lot of questions as to why. What does that mean when you’re on suicide watch? You don’t have shoelaces, you don’t have other items that you could use to hang yourself… there’s going to be a lot of questions as to why that didn’t happen. He’s already been transferred once from a different prison to the prison he was at now, for evaluation to figure out where he’ll end up permanently. There are going to be a lot of questions… of the Ohio Department of Corrections.” Watch the segment here.