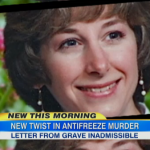 Dan was on Good Morning America this morning to discuss the reversal case of a murder that occurred in 1998,  in Wisconsin, where a federal judge, this week,  threw out the conviction of a man found guilty of murdering his wife. Days before her death, Julie Jensen, wrote a letter saying she feared her husband, Mark, was planning to kill her but the judge is now ruling the jury should have never seen that letter. The state has 90 days to appeal this federal ruling and if it does not, then Jensen will be released. Dan gives his opinion, on the fact that this case can be overturned, has some legal merit. Says Dan, “This is the sort of ruling that makes people crazy, it makes people hate lawyers. This woman goes to friends, goes to the police and says, I’m worried, my husband’s going to kill me. She writes a letter, where she details it and now we’re saying that this letter can’t be admitted into evidence? Except,  the answer is that there may have been a mistake here, in letting it in, why? Because, as the lawyer in that piece mentioned, you do have a right to confront your accuser and she made an accusation here,this was effectively testimony and as a result, the defense argues, we should have a right to cross-examiner her,  if we can’t then it’s classic, what’s called “heresy” and as a result not admissible.”  Watch the full clip here.