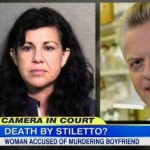 Dan appeared on Good Morning America to discuss the recent trial of Houston woman, Ana Trujillo, who is charged with the murder of her husband. Trujillo allegedly used a stiletto ( among other things) as a weapon and is claiming self defense. Dan weighs in on the legal implications of the odd weapon choice. Says Dan, “We’re not talking about a gun, we’re not talking about a knife, we’re talking about an item that someone has around, sitting around. Her claim is that she needed to grab it to defend herself. I think that will be an integral part of the defense.” Watch the full segment here.