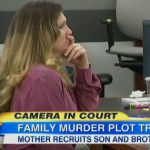 Dan appeared on Good Morning America this morning to discuss the twisted story about Amy Bessey who recruited her brother and son to help her murder her then husband, Robert Bessey. She allegedly organized a drive-by shooting scheme to murder Robert Bessey and gain his life insurance policy days before their divorce was finalized. All three family members have pleaded not guilty for attempted murder but if convicted, Amy Bessey can face up to 91 years behind bars. Says Dan, “It all started because of that gold SUV, meaning its a somewhat unusual color and the authorities put out a notice, because Mr. Bessey remembered it was a gold SUV, that was next to him. That tip led them to the gas station, the gas station led them back ect. and now they’ve got, what they believe, is a whole trove of evidence, including cell phone records, recorded conversations, ect.”  Watch the full clip here.