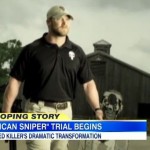 Dan contributed to a segment for ABC’s World News Tonight as well as Good Morning America on the trial of Eddie Ray Routh, the man accused of killing American Sniper, Chris Kyle and Kyle’s friend Chad Littlefield. The jury has been selected and opening statements begin Wednesday, February 11th. Selecting an unbiased jury was not an easy task as Kyle’s book has gained mass popularity following the Oscar-nominated movie, American Sniper, based on his memoir. Routh’s defense has made it clear they will be pursuing an insanity defense and prosecutors have said they will not be seeking the death penalty. Dan commented, “Just saying you’re suffering from Post Traumatic Stress Disorder is not enough to get a not guilty by reason of insanity verdict, you have to literally be able to show that the defendant did not understand right from wrong…” Watch the full clip here.