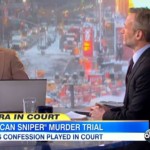 Dan appeared on Good Morning America, Tuesday, February 17th to discuss the ongoing trial of Eddie Ray Routh, the man accused of killing American Sniper, Chris Kyle and his friend Chad Littlefield. The jury has heard Routh’s confession videotaped hours after he gunned down Kyle and Littlefield and it could very well undermine his insanity defense. Dan commented, “While this is not helpful to his defense at all, this idea of him coming forward repeatedly… if he is legally insane, he’s not the guy to ask. Right? I mean, as a legal and practical matter, if he doesn’t understand right from wrong asking that guy isn’t the right person to be asking about that. You have to look at the tape in its totality about 50 something minutes long. There are a number of periods in there where he seems sort of incoherent talking about head hunters and saving his soul. He’s talking about needing to do it. Insanity always really, really tough to win but the defense hoping they focus on sort of the totality of the tape” Watch the full clip here.