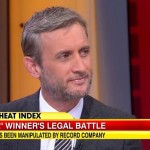 Dan joined the GMA Heat Index, on Tuesday, January 27th to discuss “American Idol” winner, Phillip Phillipss who wants out of his contract claiming that he’s been manipulated by 19 Entertainment, the company that produces his records and manages his career. Phillips is filing a petition hoping to terminate the relationship with the company he is calling “oppressive”, alleging they manipulated him into accepting jobs and entering into transactions that were not for his own benefit but rather for the benefit of 19 Entertainment and it’s affiliates. Phillips is also claiming 19 Entertainment often withheld material regarding important career matters and forced him to perform for American Idol sponsors free of charge. 19 Entertainment is fighting back claiming they always acted in the best interests of their artist. Dan commented, “He’s going to the California Labor Commission. You basically have two choices in California, you either sue or you go to this California Labor Commission. Ordinarily, you go to the California Labor Commission because you don’t want to hire a lawyer, it’s much more informal, the process is much easier you don’t typically have a sort of multi-million dollar lawsuit although it’s happened and contracts had been invalidated by the California labor commission. Although it is very tough, to get in particular this kind of deal to get it invalidated. He’s not in an easy position here.” Watch the full clip here.