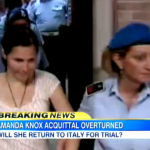 Dan appeared on Good Morning America today to discuss a familiar name back in the news: Amanda Knox. Knox, 25, was convicted in 2009 of murdering Meredith Kercher in 2007, and served four years of her sentence. Now, an appellate court overturned her murder conviction, citing lack of evidence against her. So what does the Italian court’s decision to overturn Knox’s acquittal mean? Will she go back to Italy? Dan discusses: “This is a surprising ruling. Any time an appellate court comes in and says that a different court got it wrong, it’s surprising. What this high court said is that there were some mistakes of law made in the lower court, not necessarily that she’s guilty, just that there were errors in law such that the lower court needs to review the case.” So will she return to Italy? Dan answers, “If the lower court deems that she is guilty, and the appellate court, the high court, affirms that ruling, I think that the Italian officials would then request that she be extradited, and there could be a battle.” For full coverage of the case, watch the GMA segment here.