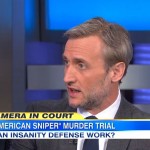 Dan appeared on Good Morning America, alongside of HLN’s Nancy Grace, Thursday, February 12th to discuss the trial of Eddie Ray Routh. Routh is the man accused of killing ‘American Sniper’, Chris Kyle and friend Chad Littlefield on February 2, 2013, at a Texas gun range. Routh is planning on an insanity defense citing PTSD as a key factor in his not guilty plea… but is that enough? Says Dan,  “PTSD is not enough to say I shouldn’t be held responsible for my actions. It has to be my PTSD was so bad that I didn’t understand right from wrong. But, look, in this case, this is a comparatively good insanity claim and what I mean by that is the insanity defense is always tough… but they have evidence here of not just mental illness, but of comments he made afterwards that may suggest that he didn’t understand what he did was so terrible. That’s the important thing in this case and to have the victim himself having said this dude is straight up nuts… that’s not a legal or medical assessment but is sure helpful to the defense.” Watch the full clip here.