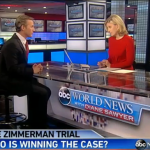 After just twelve days of the Zimmerman Trial, the testimony is over, the defense rests, and the jury will soon begin deciding their verdict for George Zimmerman on Friday.  Dan says, “Many of the facts were in dispute here.  No one challenges the notion that George  Zimmerman shot and killed Trayvon Martin.  The question in this case was why and how and that allows it to go a little quicker.”  Diane Sawyer asks if it is possible for the prosecution to turn the case around during the closing argument.  Dan answers, “They certainly have to try and they have to focus on the human aspect of this.  That it’s just wrong.  That this shouldn’t have happened.  It didn’t need to happen.  That this is a 17-year-old walking home with Skittles and an iced tea who didn’t need to die.”  Watch the full episode here.