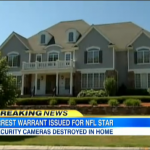 Aaron Hernandez has been linked to a homicide within a mile of his New England home.  Investigators are saying that his home security cameras, which were destroyed, may show Hernandez with the victim.  An arrest warrant was issued this morning for Hernandez, claiming that he obstructed justice.  Dan was on Good Morning America this morning to discuss how the police are dealing with Hernandez, who seems to have taken many steps to cover this crime.  He says “They feel like they’ve got him on this crime, at the very least. Meaning, they’ve got the destroyed security system.  They’ve got the cell phone in pieces. They’ve got the housekeeping coming in, et cetera. So, for now, they’re saying, boy, we think we’ve at least got enough to move forward with an arrest on obstruction of justice.  That does not mean that they will not later charge him with something more significant. They’re going to continue this investigation. They’re going to see if they can link him to something more significant.”  Watch the segment here.