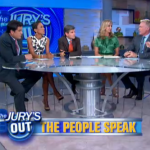 Dan premiered a new segment on Good Morning America today called “Jury’s Out,” in which Dan offers some controversial culture stories of the day, and viewers can weigh in on their take before hearing Dan’s. Today, he discusses controversial school programs that may seem a little invasive – including schools monitoring students’ weight as well as their social media use. Of the latter, says Dan, “A suburban Los Angeles district now monitoring social media accounts of all middle and high school students, searching for possible violence, drug use, suicidal threats, etc. For $40,500 a year, they’ve hired an outside company to send them a daily report about students’ social media activity.” So what does Dan think? He doesn’t have a problem with it, saying: “These are comments on public forums, and already one student who was talking about ending his life has been helped. As long as the school uses it to help students as opposed to punish them for saying something stupid, I am all for it.” For more of his opinions on hot topics (as well as the other anchors’), watch the segment here.