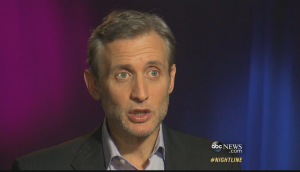 Dan appeared on Nightline, Tuesday, December 1st to discuss the rape allegations against , James Deen, a male star in the adult film industry. Deen, who has often commented on the importance of respect for women and safe boundaries, now stands accused of sexual assault by multiple women via social media. Deen has not been charged with a crime and denies the accusations but the claims have already caused major fallout for his career. Will Deen file a defamation suit? Dan commented, “If he files a lawsuit, all of this [accusations] become fair game, so for him to file a lawsuit he better be telling the truth…because otherwise he’s going to be exposed not just in the court of public opinion, but in the court of law.” Watch the full segment here.