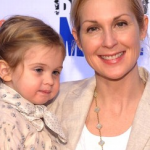 Dan spent Labor Day weekend as a co-host of Good Morning America. Besides his usual hosting duties, he had the opportunity to interview Gossip Girl actress Kelly Rutherford, whose recent custody battle has made headlines. After a judge granted custody to her ex-husband — whose American visa has been revoked — her two children, aged 3 and 5, were sent to France to live with him, making it extremely difficult for her to co-parent, as her work schedule requires her to be in New York. Dan publicly spoke of his outrage about the ruling on Good Morning America Thursday, and also penned an article for Mediaite concerning his opinion on the verdict. You can watch his weekend GMA interview with Rutherford here.