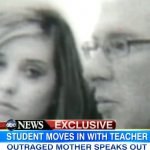 Dan Abrams and Nancy Grace appeared together on Good Morning America to discuss what has become an outrage regarding a California teacher and his high school student moving in together. James Hooker, 41, and Jordan Powers, now 18, have gone public with a relationship they say did not become sexual until she turned 18 in December. At that point, Hooker left his wife (with whom he had a daughter, 17, attending the same school) and the two moved in together. Dan and Nancy agree on most points here – there’s a lot of investigating to do, and even though California has a high age of consent (18), the prosecution, initiated by Powers’ mother, will have to provide some kind of evidence that sexual activity was involved pre-18. They have a few places to start: allegations that Powers would sit on Hookers lap at school; an outrageous number of text messages sent between the two, receipts from hotels, and more. Before ending the segment, Nancy made sure to point out to Dan how soon, he will understand the mothers urgency to fight for this case, when he becomes a father himself. To watch the discussion, click here.