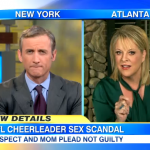 Dan Abrams and Nancy Grace appeared together with Katie Couric on Good Morning America in a debate on the developing case against this Bengals cheerleader – a former high school teacher who is charged with having sexual relations with her student, a minor. Her mother has also been charged with tampering with evidence, and one of the first issues that comes up for Nancy is the fact that this could (and should) be a more serious charge. To Couric’s assertion that the charges are unseemly, Nancy responded to say that they are actually getting at an alleged felony – not unseemly “but a sex crime against a child.” Dan comments on the fact that the inclusion of charges against the mother might be the prosecutor’s strategy at handling what is a difficult case, highlighting the fact that the alleged victim and his family are both in support of the defendant, and do not want to press charges. “You have a 16 year old,” he said, “and his mother saying they don’t want to move forward, and that doesn’t mean that the prosecutors shouldn’t – they should; they have to.” Worrying that the case will be overblown – the defendant faces at least 5 years of prison time – Dan was met with an especially incensed Nancy Grace, who accused Dan of being “all hung up on the fact that she’s a hot Bengal cheerleader! Get over that!” Watch Dan Abrams in this dynamic discussion here.