09 May Dan and Nancy on the Missing Tennessee Children 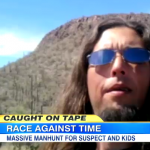 Dan Abrams and Nancy Grace appeared on Good Morning America today to discuss the pending capture of a man suspected to have abducted 4 members of the same family, two of whom have already been found dead. “They’re putting up roadblocks, etc., they’re scouring neighborhoods, but the most important thing is intelligence, here,” Dan said. He went on to describe the kind of information the authorities will want to pursue this man, saying “in a case like this someone is likely to go to an area where they feel more comfortable” – that means finding out who is friends are, who he knew, who he talked to. His ex wife is also being charged with what Dan calls “very especially aggravated kidnapping charges”; she’s a serious suspect, and Dan thinks it’s pretty clear that the authorities don’t think she was just conspiring here, but that she was “an active member of a kidnapping.” Watch Dan Abrams and the full discussion here.