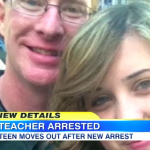 Dan Abrams appeared together with Nancy Grace this morning on Good Morning America to talk about the latest developments surrounding James Hooker. This former California high school teacher made headlines recently when his student moved into his apartment and the two made their romantic relationship public. 18 year-old Jordan Powers moved out this weekend, though, after Hooker was arrested Friday for allegations of a sexual assault, committed over ten years ago. His accuser was (then) a 17 year-old student of Hooker’s. Hooker pleaded not guilty and posted 50,000 dollar bail. Dan discussed a law passed in the mid 1990s “which basically said that when you’re talking about substantial sexual conduct with a child, you move forward within a year of the time that its reported, and you have independent evidence to back up the alleged victim, you can move forward, even though the statue of limitations has expired, like it has here.” Hooker can try and use it as a defense of course, but bringing in details regarding his recent relationship with Powers doesn’t help him, even if more evidence is needed to make a substantial argument there. For Dan Abrams and Nancy Grace’s full discussion, watch here.