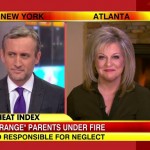 Dan went head to head with HLN’s Nancy Grace on Good Morning America, Wednesday, March 4th. They were discussing the issue of “free-range” parenting and specifically parents from Maryland, who were charged with neglect after letting their 10 and 6 year old children walk home from the park, unsupervised. The parents were found responsible by child protective services for unsubstantiated child neglect, sparking a fiery debate. Child protective services says Maryland’s state law states that children under the age of 8 must be under the care of a person who is at least 13. The family is fighting back and hiring lawyers to file an appeal. Dan commented, ” …the reality is this is not nuts in my view. The idea that two children walking in a neighborhood, 10 and 6, that their parents are now being found responsible for child neglect. The question isn’t should a 10-year-old and a 6-year-old be walking alone, that’s not the question. The question is should the authorities be stepping in and getting involved and bringing in the government to make these sorts of decisions for parents? I know how much a lot of parents want to be the parent police here. But that’s not the question. It is crazy that the authorities are involved.” Watch the full clip here.