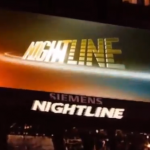 Last night, Dan anchored Nightline for an episode that included undercover journalism to reveal the true side of the sex trafficking industry in the U.S. “When we think of the most horrific of crimes, the ones so morally repugnant and barbaric, you know, the widespread ones that make you question humanity, it can help us cope to believe they happen somewhere else, somewhere far away. That’s why this weekend’s FBI prostitution sting and capture of over 150 pimps was so disturbing. Over 100 children rescued; sexual slavery here at home – how does it still happen and who are the victims?” asks Dan. To understand how this industry operates, Nightline went undercover to understand the war between pimps, young girls, and Americans willing to pay for sex. Among prostitutes, 75% of them are selling themselves because they are working for a pimp. In their investigation, they talk to a customer of a service (who may be a potential pimp) and activists trying to help girls forced to walk the streets against their will, among others. Other topics in the episode include Real Housewives of New Jersey legal/financial woes and a new feat by a tight rope walker. Watch the full episode here.