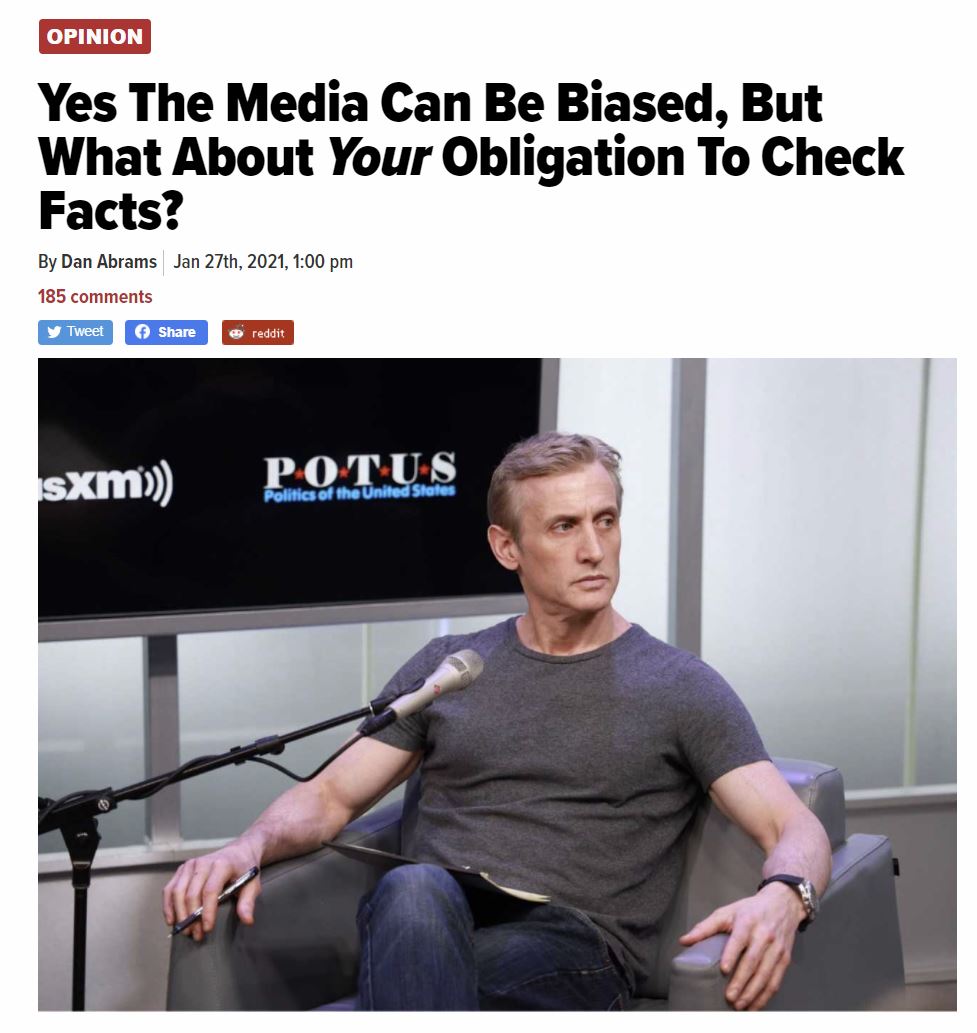 27 Jan Dan Abrams: “Yes The Media Can Be Biased, But What About Your Obligation To Check Facts?” 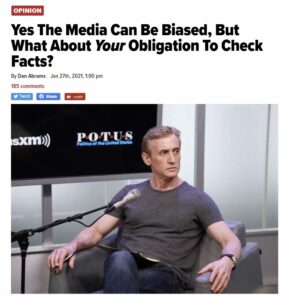 Dan Abrams is calling on members of the public to take accountability and fact check before spreading possibly false stories online or elsewhere. In an op-ed written for Mediaite, a site founded by Abrams in 2009, Abrams acknowledges the inherent bias in the media and the need to hold it accountable, but also asks the public “what about your obligation to the facts?”

Every weekday at 2PM ET, Abrams hosts a radio show on SiriusXM’s POTUS channel to discuss current events where politics meets the law. A good portion of each show is dedicated to taking listeners’ calls, a segment Abrams calls “invaluable” as he gets “to hear directly from smart people across the country, with very different perspectives, about the political and legal landscape.” While typically Abrams’ listeners are independents or political moderates from both sides of the aisle, lately Abrams has noticed an uptick in calls from listeners who are furious at the news media and convinced the 2020 U.S. presidential election was rife with fraud.

“Armed with bits and pieces of information and heaps of fury and confidence, callers seek to hold me, and by proxy the media, accountable for failing to cover the election fairly,” Abrams wrote. “I appreciate the sentiment but in the vast majority of these cases, these mostly savvy and educated callers, simply didn’t review the known facts or are unwilling to take the time or make the effort to do so.”

Abrams doesn’t dispute that there are real discussions to be had about the way our elections are conducted, noting that in every major election there are rulings and procedures determined by courts that “are legitimate subjects for debate.” What Abrams does dispute is broad claims of fraud and vague claims that “it just doesn’t add up,” even after being presented the facts. “I have enormous respect for my listeners,” Abrams stated, “so I demand that those who criticize the media for ignoring facts about the election come to the table with more than just passion and opinions.”

Abrams has long been a member of the mainstream media, but he has also been an outspoken and vocal critic of it. In fact, Abrams started Mediaite partly because he felt “there wasn’t enough accountability for the often self-righteous and pious leaders of the highly politicized media on both sides.” Bias in the media is not something Abrams debates, but “on something factual like mass election fraud, there isn’t right and left,  just right and wrong.” In the same way the public can and should demand accountability from the media, Abrams asks for accountability from the public. “It’s not their profession,” Abrams writes, “but when they have the megaphone on social media or on radio, the obligation should go both ways.”

Abrams’ full op-ed is available to read on Mediaite here.

From TV green rooms to the corridors of the senate to the latest White House press briefing, Mediaite is a trusted source on the intersection of politics and media across the political spectrum. Breaking news, analysis and opinions aplenty, Mediaite delivers it all with lightning quick speed. Mediaite is part of the Abrams Media Network.