14 May Dan Abrams: Will John Edwards Take the Stand? 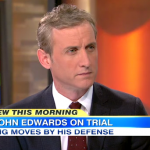 From Good Morning America: Dan Abrams continues his coverage of the John Edwards trial and faces the question, now, of whether or not the accused will take the stand. “I don’t think there’s a chance,” he maintains. “Remember, [what the Defense is fighting] here is that he’s a scoundrel and a liar, but not a criminal. I think it’s simply too risky to put that scoundrel and liar on the witness stand. I don’t see an upside here.” On The View, Dan had agreed with Chris Cuomo that at the very least, the Prosecution has succeeded in making Edwards very unlikeable, which is undeniably difficult to change. “What the Defense wants to do is force the prosecution to prove this somewhat legal hurdle.” If Edwards takes the stand, the entire case might then hinge on his testimony. “If those jurors don’t believe him, they don’t think he’s being totally honest with them, the Defense could be in big trouble and I don’t think they’re going to chance it.” For more on this and whether or not Edwards’ daughter could help, watch Dan Abrams’ full discussion here.