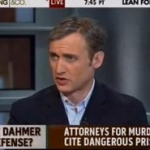 On Mediaite: Dan Abrams appeared on MSNBC to discuss defense strategies for convicted murderer Steven Hayes, who was found guilty of the murder of two young girls and their mother in Connecticut in 2007. The outlook for Hayes is bleak — according to Abrams, the best strategy the defense has is attempting to make jurors feel some measure of sympathy for him, which is unlikely given the nature of his crimes. To see the clip, click here.