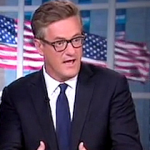 From Mediaite: In the wake of tragedy, Joe Scarborough has a bone to pick with Obama. Reports Mediaite, “Joe Scarborough and much of the Morning Joepanel took President Barack Obama to task for what they called a ‘partisan’ speech that Obama gave on Monday, while the situation following the shooting at the nearby Navy Yard was still unfolding. The panel took issue both with the fact that the speech wasn’t postponed, and with the veracity of White House Press Secretary Jay Carney’s statement that the idea of postponing it was never considered. ‘He brought his props along, and he had this political speech, and it was a harsh partisan speech from the President of the United States on any day,’ Scarborough said.” Read on here. 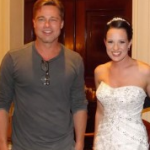 From Gossip Cop: How would you like a surprise guest at your wedding… if it was Brad Pitt? Writes Gossip Cop, “Brad Pitt made one couple’s recent wedding even more memorable. Abi and Daniel Lingwood were celebrating their nuptials with a reception at the luxury Stoke Park hotel in England when they ran into the Hollywood star, who’s filming the movie Fury nearby. ‘My husband said to me Brad Pitt was at the bar and you have got to come with me so he dragged me across the hotel,’ the bride tells the Maidenhead Advertiser. She adds, ‘I thought he was joking.’ The newlywed Lingwoods asked Pitt to pose for a picture. ‘He said sure, no problem and said congratulations and I hope you have had a great day,’ she tells the outlet, adding, ‘And he said I looked nice. He was really nice.’ Pitt’s appearance caused a major stir among the couple’s friends.” See the picture here. 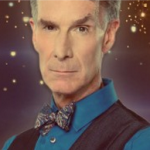 From Geekosystem: Last night was a big one for Dancing with the Stars, and Geekosystem is checking in with their favorite contestant Bill Nye: “The seventeenth season of Dancing With The Stars premiered last night, and we watched (almost) all two hours of it so we could tell you about all the great stuff Bill Nye did. Then we found a video of his routine. You should probably just watch the video instead. What you don’t get from this little clip, of course, is all the little stuff he did over the course of the program. For example: prior to his routine he wore a completely different bowtie covered in planets (I mean, come on, of course he has more than one space-themed bowtie) to go along with a dark blue-and-black suit, and spent most of his time enthusiastically bobbing his head in the background of every single frame in which he appeared. Seriously, he’s at least a head taller than everyone else in the cast. He also gave a lot of painfully awkward thumbs ups to the camera and tripped over himself at least twice before he even got onto the dance floor.” Watch the video anyway here. 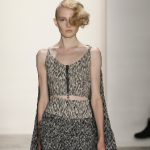 From Styleite: One trend emerged in the recent New York Fashion Week: skirts over pants. Today, Styleite dissects that trend: “In his new book Asylum Simon Doonan throws fashion people into the same boat as mental hospital inpatients who detect trends when there are none. But sometimes we don’t so much try to create a trend as we do try to ignore one when it’s staring us right in the face. This is what we have been doing for the last few days with one of the more frightening things to come out of Fashion Month so far – skirts over pants. In its less alarming form the look incorporates a gauzy textile such as lace (Simone Rocha) or chiffon (Alexandre Herchcovitch). Marques’Almeida and Osman used bias cuts and subtly embellished fabrics to make their skirts resemble Rajasthanesque sarongs. Sass & Bide and Ralph Rucci paired matchy fabrics to make their skirts and pants almost inextricably intertwined. Then there was Roksanda Illincic, who you should stay well away from if the sensation of a hefty skirt repeatedly grazing a trouser leg fills you with the same textile anxiety as rubbing velvet the wrong way.” Read on and see all the looks here. 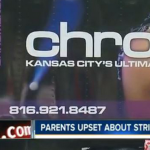 From SportsGrid: Some people aren’t too happy about the presence of strippers at their football game. SportsGrid explains, “There’s a new law in Missouri which says that strip clubs must close by midnight, and full nudity is banned (I weep for the dream that was America). So to help promote the now-struggling industry, one Kansas City club is setting up camp in the Arrowhead Stadium parking lot prior to Chiefs games. No one is actually stripping, but this still doesn’t sit well with some families, among them Angela Lukenbill of Gladstone, Mo., her fiancé Chad Smith and their two kids. Angela says they are boycotting Chiefs games until the strippers are banned. ‘Having strippers around family events is wrong. There are places set up for them and that’s where they need to be,’ she said.” Read the full story here. 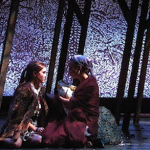 From The Mary Sue: Plenty of Into the Woods news from The Mary Sue today: “More than a year and a half after their very first announcement, Disney rolled into production on Into the Woods last week, and with the start of filming comes, naturally, the final cast. Is a viral video star, as rumored, really in the role of Little Red Riding Hood? Is Anna Kendrick in it? Are Jake Gyllenhaal, Chris Pine, and Johnny Depp all in one movie? Thank goodness we have answers to all these questions. Get ready for a wall of names. One of the earliest, and most exciting announcements about the film has panned out: Meryl Streep will be playing the Witch, so we can all sit back and start imagining the Oscar nomination now.” Read all the details here. 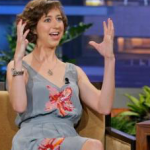 From The Jane Dough: And speaking of strip clubs… writes The Jane Dough, “Comedy, much like Wall Street, Hollywood, the food industry, publishing, STEM fields, and the Boy’s Club that you brother co-founded in fifth grade which used your basement as it’s headquarters, is a boy’s club. This masculine, “hey bro, you’re my bro, let’s be bros” energy permeates all aspects of the culture, even post-gig celebrations. Unless she wants to spend the night alone in her Best Western room, putting on Bioré Pore Strips and streaming old Gallery Girls episodes online, sometimes a girl just has to invite herself to Stiletto Gentlemen’s Club. On The Tonight Show, Jane Dough-favorite Kristen Schaal told Jay Leno about her first trip to a strip club and explained how her lap dance became a diagnostic screening.” Watch the video here. 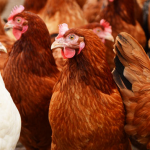 From The Braiser: There’s a new breed of chickens, and The Braiser is breaking it down for you: “If you opened up the New York Times this morning, flipped to the food section, and read an article about high-end chefs breeding their own chickens at D’Artagnan, don’t worry — you weren’t hallucinating, nor were you trapped in The Onion. It was a Real Article. Didn’t read it yet? Not to worry, we’ve got you covered. To wit, six of New York’s most celebrated chefs are in a gentleman’s race to see whose menu can, when used as a full-fledged diet, create the tastiest chicken:  On certain days, a truck pulls up alongside their quiet, spacious coop on an Amish farm here and delivers a feast that seems tailored to a flock of two-legged aristocrats. Before long, the rust-colored birds are pecking away at vegetable peelings and day-old bread from some of Manhattan’s most elegant restaurants, like Per Se, Daniel, Gramercy Tavern, the Modern, and David Burke Townhouse. It is all part of an experiment that is bringing together elite chefs, preindustrial farming practices and a breed of French poultry that is rarely found in the United States.” Read on here.