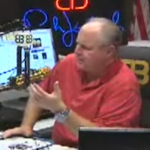 Mediaite has a clip from Rush Limbaugh’s show in which the radio host expresses some doubts about Donald Trump’s conservative bona fides. Even though he kicked off his campaign by donating to Limbaugh’s charity organization, he has reservations about this consistency on key issues. Quoth Limbaugh, “Where is it written that people can’t change their minds and can’t grow? Well, where it’s written is in core beliefs.” To hear the rest of the clip, click here. 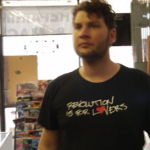 On Geekosystem: a video that is mostly inscrutable to a non-videogame enthusiast, in which there is allegedly a mashup of “Portal 2” and “Mortal Kombat 9” (aside: there are NINE???). To watch the videogame universe fold in on itself, click here. 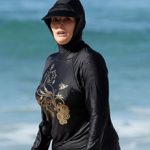 Well! Styleite has a photo of celebrity chef Nigella Lawson, who went to the beach with a coverup more extreme than most: an actual burkini. More surprising is the fact that the company manufacturing the swimwear claims that 15% of its customer base is non-Muslim. Hey, it’s an out-of-the-box solution for those afraid of sun exposure! Get the full post here. 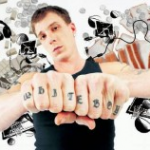 On Sportsgrid today: Jason Williams is retiring from the NBA. No word on whether or not his jersey and/or his nickname (“White Chocolate”) will be retired as well. Obviously, we will keep you posted. To read the full tribute to the man with “white boy” tattooed on his knuckles, click here. 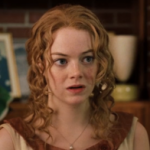 Gossip Cop has the trailer for “The Help,” a film based on the best-selling novel and starring Emma Stone and Viola Davis. Leaving aside the movie — we would all like to know W the Eff is happening with Emma Stone’s hair. To watch the trailer, click here. 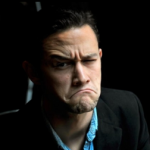 The Mary Sue reports on the latest casting news from “The Dark Knight Rises.” Joseph Gordon-Levitt and Marion Cotillard will join the cast as entirely original characters, and that sound you just heard is the collective gasp from the fandom. To read the full post, click here.