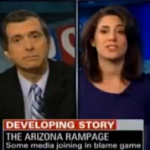 Mediaite’s own Rachel Sklar was on Reliable Sources discussing the role political imagery may have played in the shooting in Tucson, Arizona this weekend. Sklar argued that while it’s incorrect to blame Sarah Palin and other gun-imagery-loving politicos directly, there ought to be some kind of accountability for politicians who use violent language — regardless of whether it’s literal or figurative. See the clip here. 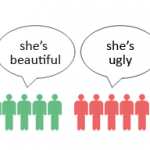 On Geekosystem: turns out if you want to get contacted on OKCupid, it’s better to be hot as the sun or ugly as sin. A study found that girls who received scores for attractiveness on the extreme low or high ends of the scale were contacted more frequently overall than girls whose ratings were mostly in the middle. So, if you’re merely cute…get hotter! Or uglier! Totally up to you! To read the full post click here. 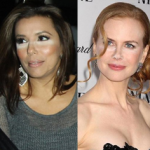 Totally bizarre — Styleite has weird, ghostly photos of celebs like Eva Longoria and Nicole Kidman, in which they appear to have thick streaks of white powder beneath their eyes. Turns out, that’s exactly what it is. The actresses have been caught wearing “HD Powder,” which makes them look luminous on television but totally crazypants when photographed with a flash. Stars — they need weird makeup to look good, just like us? Get the full post here.

On Sportsgrid: Ron Artest is choking people again! This time it was his opponent, Shawne Williams, fewer than 10 minutes into the Lakers’ game versus the Knicks. Fortunately for Williams, Artest seemed to have second thoughts about all the choking he was about to do, and managed to stop himself pre-choke. Progress! Now if only he can prevent himself from wanting to choke people in the first place. To read the full post, click here. 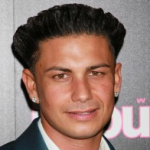 On Gossip Cop today: would’ve been a fantastically weird celeb couple, but alas, it was not meant to be! A rep has confirmed that Chloe Sevigny is not, in fact, dating “Jersey Shore”‘s Pauly D. Rumors flew after the two were spotted sitting side-by-side at a Knicks game, but they might have just been sitting together so they could guard one another from one of Ron Artests’s choking rampages. Get the full post here.