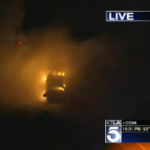 From Mediaite: Today, a Los Angeles car chase ended in a fireball on live TV. Mediaite writes, “It goes without saying that one of the reasons television networks like to cover high-speed car chases is because of the high probability of there being a dramatic ending — usually with the police getting the perp and arresting him up against the freeway pavement. Last night in Los Angeles, however, a televised car chase ended in a more unusual, potentially disastrous way. Around 10:30 p.m. PST on Wednesday night, KTLA broke live to video of a high-speed car chase on a Los Angeles freeway. The suspect fled police in a Ford Mustang, pushing speeds reportedly greater than 110 mph, eventually losing control and crashing into the freeway’s guard rails, sending the car into a dramatic explosion.”  Read on here. 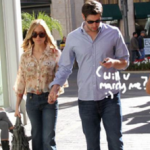 From Gossip Cop: In this age of technology, did one celebrity receive a marriage proposal via text message? Gossip Cop reports, “‘Kristin Cavallari Got Her Proposal By Text,’ blares a headline from Perez Hilton.After waxing poetic about “romance,” the bad blogger writes that Cavallari ‘was asked to marry Jay Cutler… by TEXT MESSAGE.’He then editorializes that it’s ‘a little too modern’ for him, before adding, ‘We don’t really have any words for a move like that — ha!’ Well, how about Cavallari’s words about Perez’s post and the details of her engagement? She slammed the blogger and assorted other clowns on Twitter. Cavallari wrote, ‘Stop bashing jay. He proposed in Cabo. Stop believing headlines…u have no clue.’ We couldn’t have said it better.” Read more here. 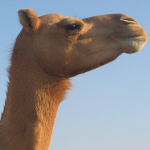 From Geekosystem: Sometimes science can come from the most unlikely of places – like camel urine. Geekosystem explains, “A research team from Saudi Arabia’s King Abdulaziz University is clamoring for more government support for their work — which isn’t exactly surprising, as most research teams are pretty much perpetually clamoring for support for their work. When that work revolves around the careful study and examination of camel urine, though… well, it’s exactly as hard a sell as it sounds. Yes, even if that camel urine may show promise as a cancer treatment, because euuuugh.Saudi researchers have been making claims about discovering anti-cancer properties in camel urine for the last several years, and are claiming they’ve shown good results in tests on healthy humans, though those results have yet to see publication.” Read the full story here.

From Styleite: Model Bar Rafaeli and GoDaddy had one of the most memorable Super Bowl commercial. Last night, she dished about it. Styleite reports, “When Bar Refaeli showed up on set, ready to lip lock with a geek for GoDaddy’s Super Bowl 2013 commercial, she thought she’d be making out with a very different guy. The spot’s producers had sent her an image of her potential costar a few days prior, as Refaeli told Jay Leno on The Tonight Show last night, and she described him as a “cute,” if fairly unassuming, “not very cool guy”. But actor Jesse Heiman ultimately nabbed the (likely much-coveted) role in lieu of the company’s original choice. And Bar was more than a little surprised.” Read more of what she had to say here. 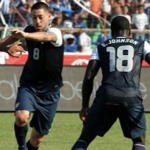 From SportsGrid: The U.S. soccer team has begun their World Cup qualifier games, and it’s not off to a great start since the U.S. lost. SportsGrid reports, “This wasn’t as big an upset as it sounds; Honduras did make the last World Cup in 2010, and the United States were playing on the road in one of the most hostile environments in the world. And we mean this literally, because the location of the match, San Pedro Sula, is considered to be the most dangerous city in the world… After taking the lead on a beautiful goal by Clint Dempsey in the 36th minute, Honduras responded four minutes later with a goal of their own on a bicycle kick. Bicycle! Juan Carlos Garcia arrowed the ball straight into the top corner of the goal, and United States keeper Tim Howard literally stood there and put his hands over his mouth. It was an unbelievable finish.” Read on and see video here. 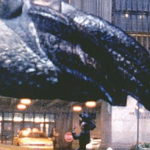 From The Mary Sue: The site has news of the upcoming Godzilla remake, and is sharing it with you: “Gareth Edwards‘ Godzilla remake has had a shaky time of things so far. It’s had a bazillion or so people working on its script (OK, more like five), which is usually not a good sign. And last month it lost two of its producers. But with original The Walking Dead showrunner Frank Darabont working on what is hopefully the script’s last rewrite and the start of production scheduled for March, it’s time for Edwards et. al. to move things along a bit. And that means casting. Variety reports that Bryan Cranston and Elizabeth Olsen are in talks to co-star in the film, as is Aaron Taylor-Johnson, though we knew about that one already. But no one’s going to get hired until Darabont finishes his rewrite, which makes sense.” Read the full story here. 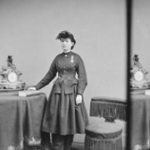 From The Jane Dough: If you loved Lincoln this awards season, this article may interest you. Writes The Jane Dough, “We normally think of Abraham Lincoln as a bastion of progressiveness (however reluctant) and medicine as a field rife with hot male and female doctors hooking up (maybe that last thing is just my problem after spending nearly a decade with the nutjobs on Grey’s Anatomy), but we’re going to have to adjust our perceptions after reading this Atlanticpiece on the female Union army doctor who was never given her proper due. Mary Walker was an early women’s rights activist and ardent abolitionist, who closed down her practice when the war began, hoping to make herself useful to the Union army. Although several hundred women disguised themselves as men to fight in the Civil War, Walker wanted to be acknowledged for exactly what she was: a kick-ass female doctor.” Read on here. 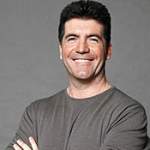 From The Braiser: Is Simon Cowell going to try his hand in the culinary world? Maybe so, The Braiser reports, “This reality cooking competition trend has now officially Reached The Zenith, because reality TV’s great-granddaddy Simon Cowell wants a piece of that zenith-y action. Radar reports (so take this with a grain of salt) that Cowell, known for producing entertainment behemoths like American Idol and The X-Factor, is in talks with FOX to bring his newly-launched UK cooking show, Food, Glorious Food!, to the US. (Apparently the pun-addicted British press corps have started calling it the Eggs Factor.) The kicker: he wants either Adam Richman or Anthony Bourdain to host. The notoriously judgemental Cowell does not appear in any episodes of Food, Glorious Food!, named after a famous musical number sung by starving orphans in a workhouse.” Read all the details here.