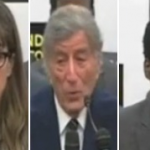 From Mediaite: Gun control advocacy continues, and today Hollywood began a “national conversation” in a new way. Mediaite reports, “The ‘national conversation’ about gun control has become a distinctly circular one in recent weeks. With nearly two months having elapsed since the tragic massacre in Newtown, Connecticut, gun control advocates and opponents have made their arguments, debated the merits of the other’s positions and, for the most part, have agreed to disagree. But for gun control advocates, the conversation never ends – even if the only people still listening are those already in agreement. A case in that point was made today when a cavalcade of Hollywood stars joined several prominent Democratic politicians to ‘demand a plan’ to address gun violence.” Read the full story here. 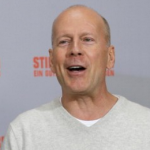 From Gossip Cop: While some celebrities may be for gun control, as mentioned above, Gossip Cop is reporting that “Bruce Willis is against new gun control laws.” Writes the site, “‘I think that you can’t start to pick apart anything out of the Bill of Rights without thinking that it’s all going to become undone,’ the Die Hard star explained to the Associated Press. He continued, ‘If you take one out or change one law, then why wouldn’t they take all your rights away from you?’ Willis’ opinion runs counter to that of fellow action star Sylvester Stallone, who signaled his support for gun control last week. Willis also dismisses the notion that there’s a link between Hollywood shoot-em-ups and real-life gun violence.” Read the whole piece here. 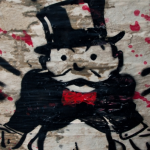 From Geekosystem: Big changes are coming to a beloved boardgame. Geekosystem explains, “When Hasbro announced that it would hold a vote to replace one of Monopoly’s tokens with a new one, I made some suggestions for better pieces. It looks like they ignored my brilliant suggestion of putting a jet pack in the game, because today they’ve announced the results of their election. We have the results, and Hasbro’s over-the-top animations announcing said results. The announcement that Monopoly would be shaking up its token lineup came last month. The company held a vote on their official Facebook page that let users pick their favorite current piece, and also pick which piece they wanted to see added to the game. The piece with the least support would get the axe, while the new suggestion with the most votes would get added.” Find out the results here. 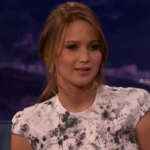 From Styleite: It seems more of Jennifer Lawrence’s eccs are revealed every day. Did you know she once modeled for Abercrombie? Styleite explains, “Jennifer Lawrence‘s acting career may have begun with the coveted role of “Lisa” in promos for MTV‘s ‘My Super Sweet Sixteen’, but her modeling career began — and ended — with a series of advertisements for Abercrombie & Fitch. While Lawrence may have the posing thing down pat these days, the ways she tells it, that wasn’t always the case. The 22-year-old was on Conan last night, and told the host the story of her short-lived stint as a model… The photos, it seems, show the actress playing football on the beach with a group of other shiny-haired, All-American teens. Except while they were ‘model footballing,’ she was ‘really playing football.'” Read more here. 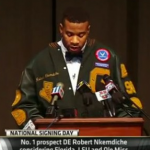 From SportsGrid: Today is football signing day, the first day high school football recruits can sign binding letters of intent with the colleges of their choice. SportsGrid’s Glenn Davis reports on the happenings, “We’ll get the usual disclaimer out of the way first: yes, it’s more than a little unsettling that a highly successful cottage industry exists based on the intense interest of adults in the decisions and whims of high schoolers. However, it exists because people love college sports, and recruiting is often (correctly) described as the lifeblood of those sports. Full disclosure: I’m an avid follower of recruiting, especially in football… Therefore, I know that today is a big day that will cause much productivity to be lost in many offices throughout America, and I know that this is one of the biggest pieces of news that will emerge today: Robert Nkemdiche, ranked by Rivals as the top recruit in the nation, is going to Ole Miss.” Read more news here. 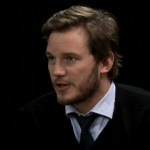 From The Mary Sue: Welcome to the Marvel universe, Chris Pratt, says The Mary Sue. Writes the site’s Susana Polo, “Let February 6th, 2013 stand as the day I started desperately trying to remember that Star-Lord has a hyphen in it, for, after much deliberation, Marvel Entertainment has confirmed their choice of Chris Pratt for Star-Lord, the leader of the Guardians of the Galaxy. There were lots of other folks on the short list, according to deadline, including Pratt’s Zero Dark Thirty co-star Joel Edgerton, Jack Huston, Jim Sturgess, Lee Pace, Eddie Redmayne, Zachary Levi, and even Joseph Gordon-Levitt. Okay, so that’s not so much a short list as fishing around for every available young, white leading man in Hollywood who look like they could pack on the muscle. In addition to Zero Dark Thirty, Pratt’s credits span Parks and Recreation, The O.C., and even the upcoming Lego move.” Read more here. 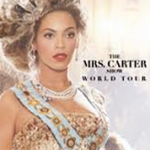 From The Jane Dough: The world may be head over heels for Beyonce this week, but The Jane Dough’s Sarah Devlin is singing a slightly different tune. She writes, “The world fell to its knees and genuflected after Beyoncé’s Super Bowl halftime show on Sunday, so it’s no surprise that news of her Mrs Carter 2013 world tourwas met with a rapturous response. People got even more excited when news broke that exclusive “VIP” presale tickets would become available for many of the concert dates at 10am this morning.” However, at 10am, the website was down. She continues, “I…think this is a conspiracy. Look, I realize that Beyonce.com is going to get exponentially more traffic than usual on a morning like this one. But Beyoncé’s marketing team is dependent on this frenzy to sell tickets. Couldn’t they, you know, take precautions to make sure that the influx of users wouldn’t crash the site?” Read on here. 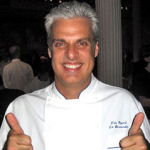 From The Braiser: Is Eric Ripert changing the face of wine pairings? The Braiser reports, “In an interview with food writer Andrew Harper, Eric Ripert mused on the evolution of his renowned restaurant Le Bernardin in terms of its customers, its menu, and its decor. More importantly, though, he had a few things to say about what is, and is not, okay to do with fish, and when Eric Ripert says something about fish, one must believe him. (It’s the natural law.) For instance, Ripert blew our minds when he said that, contrary to decades of opinion, one can absolutely pair seafood with red wine. ‘It’s true — red wine goes fantastic with fish,’ the sea king laughed, and we mere mortals fell blinded in awe of this divine knowledge.” Read the full story here.