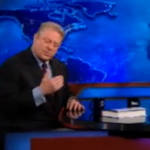 From Mediaite: Many criticized Al Gore’s move to sell Current TV. Yesterday, The Daily Show host Jon Stewart sat down to talk with Gore, reports Mediaite: “On Wednesday night, Al Gore faced further questioning about his decision to sell Current TV to Al Jazeera. This time, from Jon Stewart — who deemed it an ‘odd move’ to sell to a network ‘backed by fossil fuel money.’ ‘I’m proud of the transaction,’ Gore told Stewart, reiterating the message he’s given everyone: that Al Jazeera is a well-respected organization with high-quality coverage of climate change issues. (Critics of Gore’s sale to Current TV have pointed to, among other things, Gore’s reputation as a environmental activist focused on climate change.)” Read more and watch video of the segment here. 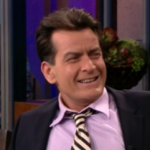 From Gossip Cop: Charlie Sheen appeared on yesterday’s The Tonight Show with Jay Leno, and as per usual, had a lot of things to say. Writes Gossip Cop, “Finishing up a conversation about steroids in baseball, Leno asked Sheen what he thought of Lance Armstrong. ‘He’s kind of a douche,’ replied the star, going on to describe an awkward personal run-in Sheen had with the disgraced cyclist several years ago. Sheen added, ‘If he was a better guy [in his life], he’d be forgiven a lot faster and a lot easier — kind of like me!’ Later, Leno asked Sheen about the story that he loaned Lindsay Lohan $100,000, and he had nothing but praise for the actress.” Read on and watch video of the appearance here. 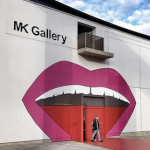 From Geekosystem: Sometimes art exhibits can be interactive. In the latest, an artist made a very interesting artistic – and financial – move in his show. Geekosystem explains, “British artist Tomas Georgeson has come up with an intriguing way of promoting his latest gallery show,reasoning that if you can’t get people excited to come to your show, maybe you can just bribe them instead. To that end, Georgeson has hidden a check for the sum total of his life savings somewhere in the gallery and declared that the person who finds it gets to keep it. To get people talking about his latest art show at Milton Keynes Gallery, about 45 minutes outside of London, Georgeson put everything he has on the line. Somewhere in the gallery, he announced in a local paper, there is a check for 8,000 pounds, or about $12,600 — the entirety of Georgeson’s life savings.” Read on here. 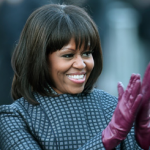 From Styleite: Karl Lagerfeld always seems to have something to say, and in the latest, he (like the rest of the world) is weighing in on Michelle Obama’s bangs. Writes Styleite, “Few have dared speak ill of Michelle Obama‘s bangs since she debuted the new style on her 49th birthday earlier this month. They’ve earned the approval of everyone from Conan O’Brien toMadeleine Albright, and even won the all-important presidential endorsement. But leave it to Karl Lagerfeld to take a contrarian stance on the matter, which he did earlier this week during a couture week interview with France’s Canal Plus. Presented with two photos of the FLOTUS pre- and post-bangs, the ever-quotable designer admitted he preferred the former ‘do. ‘I have to say, I don’t understand the change of hair,’ Karl said in French, while insisting that he still adores ‘Madame Obama.'” Read more of what he had to say here. 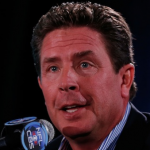 From SportsGrid: The big headline of sports media today? Dan Marino’s love child. SportsGrid reports, “According to the New York Post, Dan Marino, a pregame analyst with CBS since 2003, had an affair with a network employee back in 2004. She gave birth to their child, Chloe, in 2005. Marino — who is still married — paid the woman, Donna Savattere, to keep quiet… As the Post points out, Marino has always been portrayed as a ‘squeaky-clean’ guy. He claims that his marriage is ‘still intact’ despite the truth leaking. Marino is in touch with the now-seven-year-old. ‘Impromptu meetings’ were a part of the agreement. He responded to the situation yesterday… There’s no mention of comment from CBS, so as of now, Marino’s face will still be plastered to your TV for hours before the game, on Sunday.” Read the full story here. 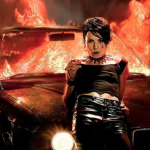 From The Mary Sue: Could the next Girl with the Dragon Tattoo film feature a female lead? The Mary Sue reports, “What’s Stieg Larsson’s Millennium Trilogy without Mikael Blomkvist? Sony hopes it’s a wildly successful film sequel starring a women in the lead role. They’ve got our attention.  David Fincher’s American adaptation of The Girl with the Dragon Tattoo was enough of a success Sony planned to continue the series with The Girl Who Played with Fire. But The Hollywood Reporter recently wrote Daniel Craig might not return even though the studio has options on him for the entire trilogy. The reason is, of course, money. Craig’s latest Bond outing made $1 billion worldwide and word is he wants a bigger cut for The Girl Who Played with Fire.” Read more details here. 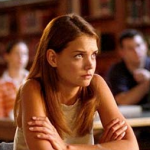 From The Jane Dough: Katie Holmes has made some interesting career moves as of late – could the next be a foray into law? The Jane Dough explains, “What is happening with Katie Holmes career? One day she is just a sweet girl on a hit WB show about a creek, then she has a hot film career, then she’s Tom Cruise’s wife who dabbles in fashion, then she’s a Scientologist escapee, then she goes back to acting and now the rumor is that she may be applying to law school. From the National Enquirer (so, uh, grain of salt here): ‘She expressed a keen in­terest in law while splitting from Tom Cruise, and now that the divorce is finalized, she has the time, the money, and the opportunity to go to school. More importantly, she wants to be a strong female role model for her daughter Suri.'” Read on here. 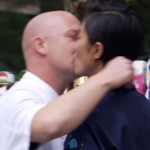 From The Braiser: In recent seasons, Top Chef has introduced a twist called Last Chance Kitchen. Today, The Braiser reports on what happened in last night’s edition: “It could have been a tense, embittered divorce showdown on last night’sLast Chance Kitchen, with Kristen Kish facing off against her predatory stalker / beloved show-husband Stefan Richter. But as soon as Tom Colicchio revealed the protein of choice, both chefs put their heads down to work. In honor of Stefan’s astonishing four turns at the bottom of Elimination Challenges, Tom tasked the dueling chefs with cooking offal — a cut of meat just as undesirable as Stefan. (Tom’s smugness is palpable.)” Check out Last Chance Kitchen in its entirety to find out which spouse prevailed here.