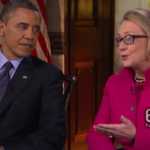 From Mediaite: As President Obama’s second term begins and Secretary of State Hillary Clinton continues to respond to the Benghazi hearings, they sat down for a joint interview on 60 Minutes last night. Mediaite reports, “Steve Kroft, who interviewed the president several times during his first term, asked the pair about a variety of topics, most notably including the administration’s response to the attacks on the U.S. consulate in Benghazi. Asked why he decided to do a joint interview with Clinton, the president explained that he wanted to thank her for the job she’s done as his Secretary of State. The two also briefly nodded to their contentious 2008 primary race, which is clearly water under the bridge for both sides now.” Watch the interview here. 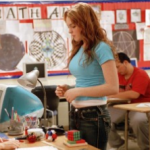 From Gossip Cop: Tina Fey dropped some exciting news at the SAG Awards last night: that she’s hoping to make a Mean Girls musical. Writes Gossip Cop, “The ’30 Rock’ star, who wrote and acted in the hit 2004 Lindsay Lohan movie, told E! News at the Screen Actors Guild Awards on Sunday that she and her husband, music composer Jeff Richmond, might develop the project. ‘Maybe! We want to. I would love to,’ Fey said on the red carpet, when asked if the musical was really a possibility. She added, ‘I think Paramount’s on board.’ A rep for Fey could not confirm more details to Gossip Cop. The writer-actress said she ‘loved’ seeing Mariah Carey and Nicki Minaj talk about Mean Girls during a recent ‘American Idol.'” Read more about it here. 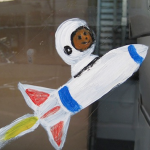 From Geekosystem: We may have put a man on the moon, but Iran just put a monkey into space. Reports Geekosystem’s Ian Chant, “Reuters is reporting that the aerospace arm of Iran’s defense ministry has successfully launched a monkey into space and retrieved it alive, thereby pushing Iran’s young space program leaps and bounds forward, all the way into the 1950s. We would say welcome to the party, Iran, but frankly, the idea of you having rockets really just makes everyone uncomfortable, so… come in if you have to, I guess? According to Iran’s state-run news agency, IRNA, the monkey’s trip wasn’t a particularly long or eventful one, more or less providing proof of concept that Iran can send a live monkey into space and get a live monkey back, as reports indicate that a rhesus monkey launched into space by the country in 2011 was not as lucky.” Read more here. 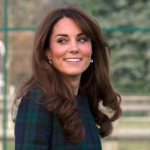 From Styleite: Kate Middleton has been spotted shopping for a very specific maternity clothing item. Styleite writes, “Even though she has yet to show any hint of a baby bump, speculation about Kate Middleton‘s maternity wear is going strong. Well, now we know at least one article of clothing that the mom-to-be is on the lookout for, and it’s just as practical as you might expect from a Duchess who swipes herStarbucks card for her morning latté, makes trips to the grocery store, and carries around a stack of points cards while shopping on the high street: jeggings. According to People, Kate was spotted on Friday at the Gap in Sloane Square, London by an intrepid fellow shopper, who tipped off the tabloid to the royal’s retail habits.” Read the full story here. 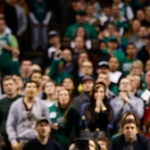 From SportsGrid: Did you watch the NFL ProBowl last night? Probably not, so SportsGrid is here to fill you in: “You know that lingering parasite, the one in which several non-selected all-star football players compete in a game wearing brightly colored uniforms? Right, the Pro Bowl. Well that went on last night because Roger Goodell enjoys hanging onto the vestiges of decorum, or something. The NFC won, by the way.” The site continues, “The MVP of the Pro Bowl didn’t make the Pro Bowl. Kyle Rudolph, Minnesota Vikings tight end, did not make the Pro Bowl this season – probably because he didn’t even have 500 yards receiving on the season. But Pro Bowl starter Tony Gonalez of the Atlanta Falcons, well he didn’t show. So Rudolph played in his stead, catching 5 passes for 122 yards and a TD, while also winning the MVP.” Read more here. 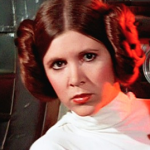 From The Mary Sue: Keeping you up-to-date on all the Star Wars rumors, The Mary Sue’s Rebecca Pahle reports on the latest: “And with the confirmation that J.J. Abrams is directing Star Wars: Episode VII, the rumor mill begins spinning anew. What’s the latest on the first installment in the sequel trilogy? Two things. One, it might be coming out later than 2015. And two: Rumors about a female protagonist just got a little more weight to them. Yay to both things! First, regarding the female protagonist. The rumors were kicked off when /Film editor Peter Sciretta tweeted earlier this month ‘Who said the lead character in Star Wars Episode VII is going to be a male star?’, which is more than a little cryptic… Whether you like them or not, the financial successes of the Twilight series, The Hunger Games, and Snow White and the Huntsman have proven that movies with female leads can rake in the big bucks, and that’s what’s important to a studio like Disney. Cynical, but true.” Read all the details here. 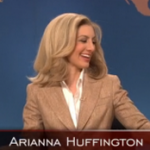 From The Jane Dough: This past weekend’s Saturday Night Live brought some great moments for women, thanks to Nasim Pedrad’s appearance as Arianna Huffington. Writes The Jane Dough, “She brought her usual batty realness to the segment, saying things that sounded vaguely feminist but that upon closer examination turned out to be warmed-over gender stereotypes (representatives in Congress grilled Hillary Clinton on Benghazi but spent their time with John Kerry ‘patting each other on the back like a garage band in a Viagra commercial’) and amorously referring to Seth Meyers as her ‘flaky little baklava’ and, more plainly, ‘Sex Meyers.’ Particularly amusing was the moment when Meyers asked Arianna to comment on the Secretary of Defense lifting the ban on women in combat. Did she agree that women would make good fighters? Of course, she answered.” See that moment here. 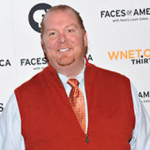 From The Braiser: Health inspections can be a pesky thing for a restaurant, but Mario Batali has found a solution. Reports The Braiser, “The New York Post reports today that Mario Batali, allegedly fed up with the ‘arbitrary and unfair’ nature of New York’s health inspections, has installed a sophisticated alarm system in his restaurants that warn kitchen staff when health inspectors are on the premises. Ok, maybe it’s not as sophisticated as, say, some restaurateurs’ customer databases, but as an anonymous employee described it, it’s a fairly effective system… Though Batali hasn’t commented on the system, which is supposedly in place in all nine of his restaurants, his partner Joe Bastianich dismissed the accusations as ‘idiotic.'” Read the whole article here.