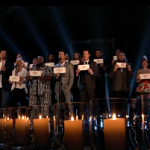 From Mediaite: Hollywood has been finding ways to pay tribute to the victims of Friday’s tragedy in Newtown, CT, and last night The Voice did their part, reports Mediaite: “Three days after the shootings in Newtown, Conn., NBC’s reality talent show The Voice kicked off its third season finale with a touching tribute performance for the 20 schoolchildren and 6 adult staff members killed at Sandy Hook Elementary School. All 20 of the show’s contestants came together on stage, joined by judges Cee Lo Green, Christina Aguilera, Blake Shelton, and Adam Levine, along with hosts Carson Daly and Christina Milian. Each singer held up a placard with the name and age of one of the 26 people killed at the elementary school. The group stood in the pitch black, surrounded by candles.” Read more and watch video here. 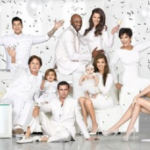 From Gossip Cop: Christmas cards may be starting to fill your mailbox, but the best one has just been released. Reports Gossip Cop, “It’s not officially Christmas until the Kardashians release their annual holiday card. On Tuesday, the reality clan graced the world with their 2012 seasonal greeting, featuring the whole family clad in white amidst a background of white balloons and silver confetti… Newcomers this year include Kourtney Kardashian and Scott Disick’s baby Penelope, as well as Kim Kardashian’s late kitten, Mercy. Khloe Kardashian said of the photo, ‘We had such a fun time shooting this!’ The ‘X Factor’ co-host recently revealed on ‘Ellen’ that the picture is photoshopped in order to add in family members who can’t be there for the shoot.” Read more and see the full picture here.

From Geekosystem: If you are eagerly anticipating the new season of  Game of Thrones, you should also eagerly anticipate its accompanying beverage release, reports Geekosystem: “We’ll just go ahead and say it — the thought of watching the premiere of Game of Thrones without a strong, cold, adult beverage just never really occurred to us. Considering how often the characters are quaffing, we just find ourselves in the mood. Not that anyone can blame them for imbibing perhaps a bit too passionately — on the heels of a hard day of blood and fire and political intrigue, there’s nothing quite like kicking back and putting your feet up with a frosty mug of beer. Once again, HBO has anticipated our needs pretty well, teaming with New York’s Ommegang Brewery to produce a Game of Thrones inspired blonde ale that pairs nicely with pigeon pie, a whole pig on a spit, and the blood of your vanquished foes.” Read the full story here. 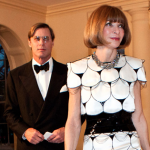 From Styleite: The Anna Wintour for ambassador rumors keep coming, and someone very important to her is speaking out about them. Reports Styleite, “Shelby Bryan, Wintour’s boyfriend of 13 years and a mogul in his own right, gave an interview to theDaily Telegraph, and we think he hit the nail on the head with his explanation for why she’s received so much sarcasm and contempt from the media over rumors that she was under consideration for a diplomatic post: ‘male chauvinism.’ Everyone from Fox to ABC has given the extremely accomplished Vogue editor grief over the very suggestion that she might be appointed, which Bryan says is unfortunately not very surprising: ‘It’s not just Anna – I see powerful women who really get slammed for being too forthright or running their business in a very determined way.'” Read the article here.

From SportsGrid: Jeremy Lin made his return to New York yesterday. SportsGrid reports on what went down: “Linsanity made its return to Madison Square Garden, and against a Carmelo Anthony and Rasheed Wallace-less Knicks, Jeremy Lin’s Rockets took care of business. Their 109-96 win handed the Knicks their first home loss of the year, making them the last team to lose at home. Lin came out to a mixed chorus of cheers and jeers, but it transitioned into all-out boos once the game started and he got the ball — not unlike LeBron James’ first few visits to the Garden after the summer of 2010. You can’t blame the Knicks contingent either, seeing as Lin dropped 22 points on 60 percent shooting and 8 assists in one of his strongest performances on the season. Though something tells me the Knicks should’ve seen it coming.” Read more here. 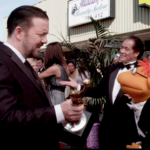 From The Mary Sue: News of The Muppets movie sequel has started to break, and the latest question surrounding the project involves Ricky Gervais. Reports The Mary Sue, “British comedian Ricky Gervais is in talks for the upcoming sequel of The Muppets! But who would he play?  We previously brought you word of Inglourious Basterds star Christoph Waltz in talks for a role. It’s not the same one Gervais is up for and actually wound up going to Modern Family actor Ty Burrell instead. Burrell will play an Interpol inspector in the sequel which finds the Muppet crew in Europe. The Hollywood Reporter writes, ‘Gervais, however, would play the lead — as much as one can be a lead opposite Kermit, Fozzie and Miss Piggy — with his stature being compared to the role played by Jason Segel in the 2011 movie.’ …Gervais and Burrell are two of three main human roles said to be available for this film but we can expect tons of all-star cameos throughout.” Read all the details here.

From The Jane Dough: Have you been a loyal Gossip Girl throughout the show’s run? Well the series came to a close last night, and The Jane Dough’s Laura Donovan writes that the finale missed the mark: “Two years ago, ‘Gossip Girl’ guest star Tim Gunn labeled series regular Taylor Momsen, who eventually got pushed out of the series, a ‘brat’ who failed to see what a great privilege it was to work on a popular program… Of course, Momsen, who made a 10-second cameo in the final installment of ‘GG’ last night, was far from the only cast member to seemingly take a half-baked approach to the CW drama. I won’t spoil any of the episode’s big revelations or secrets, but I will say that weddings happen and we learn the true identity of Gossip Girl, who has been writing about the Upper East Siders for years on end, much to the chagrin of untouchable ‘It Girl’ Serena van der Woodsen and best friend Blair Waldorf.” Read more, including her opinion, here.

From The Braiser: Think frozen food isn’t healthy? Think again, says England’s Newcastle University, whose recent study found that those meals might be healthier than those of Britain’s most celebrated celebrity chefs. Writes The Braiser, “Unsurprisingly, the study dinged Nigella Lawson, she of the infinite cream — but shockingly, the recipes of prominent health king Jamie Oliver were called out as well. The study examined 100 recipes from 30 of England’s most beloved cookbooks, authored by many of the country’s top celebrity cooks and homemakers, and compared them with 100 randomly selected brand-name frozen dinners from many of the country’s top supermarkets. The results: while neither of the options met any sort of criteria for a balanced diet, the celebrity chef recipes contained far more ‘energy, protein, fat and saturated fat and significantly less fibre than the ready meals,’ according to the Guardian.” Read on here.