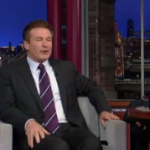 From Mediaite: When Obama won re-election, many Romney supporters threatened to secede from the country. Last night on CBS’s Late Show, David Letterman had a good laugh at their expense. Reports Mediaite, “Roughly 700,000 Americans have signed on to the petitions to secede thus far. The movement has been most popular in southern states like Alabama, Florida, Georgia, Louisiana, North Carolina, Tennessee, and Texas. ‘It’s so strange because I had many of those states on a list of states I would like to secede from the United States,’ joked Baldwin. ‘And what will they do? I’d kind of like to see this,’ Letterman asked. ‘What would they call it? The United Flakes of America?’ Baldwin mocked. ‘The United States of Caucasia?'” Read more and watch video here. 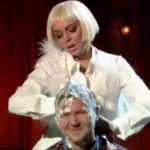 From Gossip Cop: Lindsay Lohan just keeps making bizarre choices. In the latest, her late night appearance on Jimmy Fallon left viewers with questions. Reports Gossip Cop, “Lindsay Lohan made a surprise appearance on Wednesday’s ‘Late Night withJimmy Fallon,’  helping the host with the latest installment of his bizarre ‘Let Us Play With Your Look’ segment. Wearing an all-white outfit and wig (matching Fallon), the actress took an audience member on stage and proceeded to mash stuff into his hair while Fallon sang himself unconscious. Then she battled the stage curtains. We don’t expect this type of performance art when Lohan sits for an interview with Jay Leno next week.” Read on and watch video of the strange segment here. 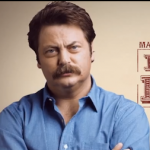 From Geekosystem: Are any of you participating in Movember? And fearing that the awkward mustache phase may never go away? Parks and Recreation star Nick Offerman offers some support, reports Geekosystem, We’re almost halfway into Movember, and if you’re growing a sweet ‘stache for charity, we salute you. If you’re having doubts about your underdeveloped moustache, though, don’t worry. America’s moustache hero Nick Offerman is here with some more words of encouragement… As you might expect, it’s tremendous. This time Offerman is joined by some cast members from The Office showing us that, in times of moustache uncertainty, it’s important to keep a stiff, hairy upper lip and remember one thing: ‘It gets fuller.'” Read the full story and watch the video here. 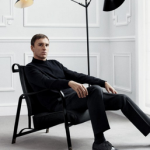 From Styleite: After the John Galliano controversy left Dior in need of a new leader, it was unclear who would take over. Finally, the mystery has been solved, reports Styleite: “Finally, some of the mysterious behind-the-scenes dealings surrounding the top spot at Christian Dior are coming out. While we were speculating (and speculating, and speculating) about who would fill the shoes of John Galliano at the venerated French house, it turns out Marc Jacobs was arguing with his partner about whether to accept the offer and Raf Simons was in meeting after meeting after meeting about the possibility of his taking over the post. Of course, Simons was eventually named the head honcho at Dior, and in a lengthy profile in December Vogue, he tells the tale of exactly what went down.” Read all the details here. 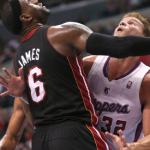 From SportsGrid: Last night in basketball, the Clippers beat the Miami Heat, and seem to look like a legitimate team. Reports SportsGrid, “If you thought adding Ray Allen to a championship team meant the Heat would storm through the rest of the NBA almost untouched (and honestly, who could have blamed you for predicting that?), well… not quite. Sure, they’re still 6-3 following last night’s 107-100 loss to the Clippers at the Staples Center, a score only made that close by a late and ultimately meaningless rally, but they’re only 2-3 on the road. In addition, two of those wins have come by just three points each. It’s early, and the Heat should still be right in the thick of the championship race when all’s said and done. As for the Clippers: this team is dangerous. They’re 6-2, and the Paul-to-Griffin connection is as lethal as ever.” Read the whole story here. 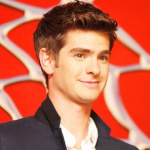 From The Mary Sue: Andrew Garfield, stop being so adorable. The Mary Sue reports on the star’s latest endeavors, “If you’re booked on Ellen it’s a known fact you will probably be asked to dance at some point during the show. The context may not always be the same but it’s always something to watch. In this particular instance Amazing Spider-Man star Andrew Garfield was asked to perform several different types of dances on the spot. For each one he got correct, $1000 would go to charity. The thing is, most of the dances required some significant pop-culture awareness, something I’m sure not a lot of actors actually have considering they’re too busy being a part of that very culture. Regardless, Garfield pretty much nailed them all.” Read more and watch the video of his performance here. 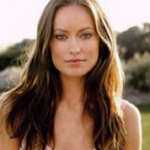 From The Jane Dough: From one successful woman to another, starlet Olivia Wilde is offering career advice. Reports The Jane Dough, “The Incredible Burt Wonderstone star Olivia Wilde seems pretty confident professionally and personally, but the 28-year-old wasn’t always sure of herself in working environments. Even early on, she knew that one seemingly innocuous move could change the course of her career forever — and also that work invites many lose-lose situations and traps. While serving as a ‘terrible’ assistant fresh out of school, she sported a cashmere turtleneck to work after witnessing an aspiring performer lose an opportunity for donning an itty bitty outfit to an audition. Of course, the bulky, shapeless top wasn’t the right choice either, Wilde told a crowd of around 250 carefully selected women at Marie Claire magazine’s ‘The Power of Presence’ event. That’s why, the A-lister said, it can be tough to know exactly how to approach the workplace as a female.” Read more here. 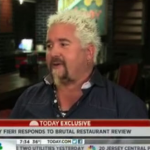 From The Braiser: Pete Wells’ New York Times review of culinary celebrity Guy Fieri’s new NYC restaurant is making waves in the foodie world. So much so, there was an entire Today Show segment dedicated to it today. Reports The Braiser, “Savannah Guthrie made the pilgrimage from 30 Rock to Times Square this morning to speak with Guy Fieri from right inside Guy’s American Kitchen and Bar. He took a red-eye from Los Angeles just for the exclusive Today Show interview, in which he officially responded to Pete Wells’review of his restaurant. Here’s a snippet of Guy’s retort: ‘I just thought it was ridiculous. I’ve read reviews. There’s good and there’s bad in the restaurant business. But that to me went so overboard, it really seemed like there was another agenda.'” Read more of what he had to say and watch the segment here.